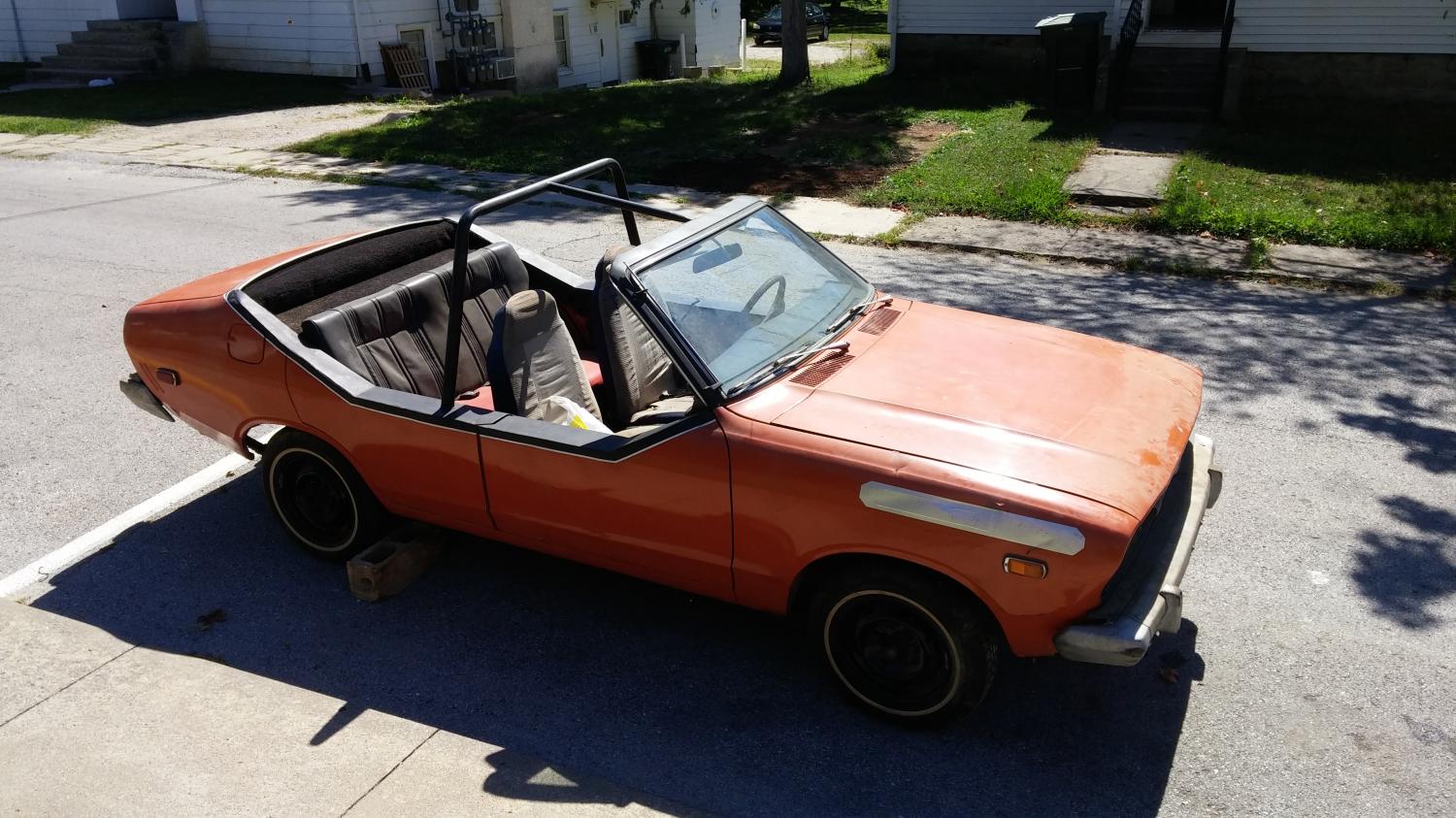 This one is named Dullahan. Since it's a Japanese car, I figured it was only right to name it in reference to an anime; in this case, Dullahan is the bicycle of King Satan from the anime The Devil Is a Part-Timer, one of my favorites.

Dullahan was owned by the same person who gave me Stiltzkin, and like Stiltzkin, I got Dullahan for the cost of going to Tennessee to pick it up - no money changed hands. It had not run in about fifteen years, but was in good condition, except all the brakes were seized solid. 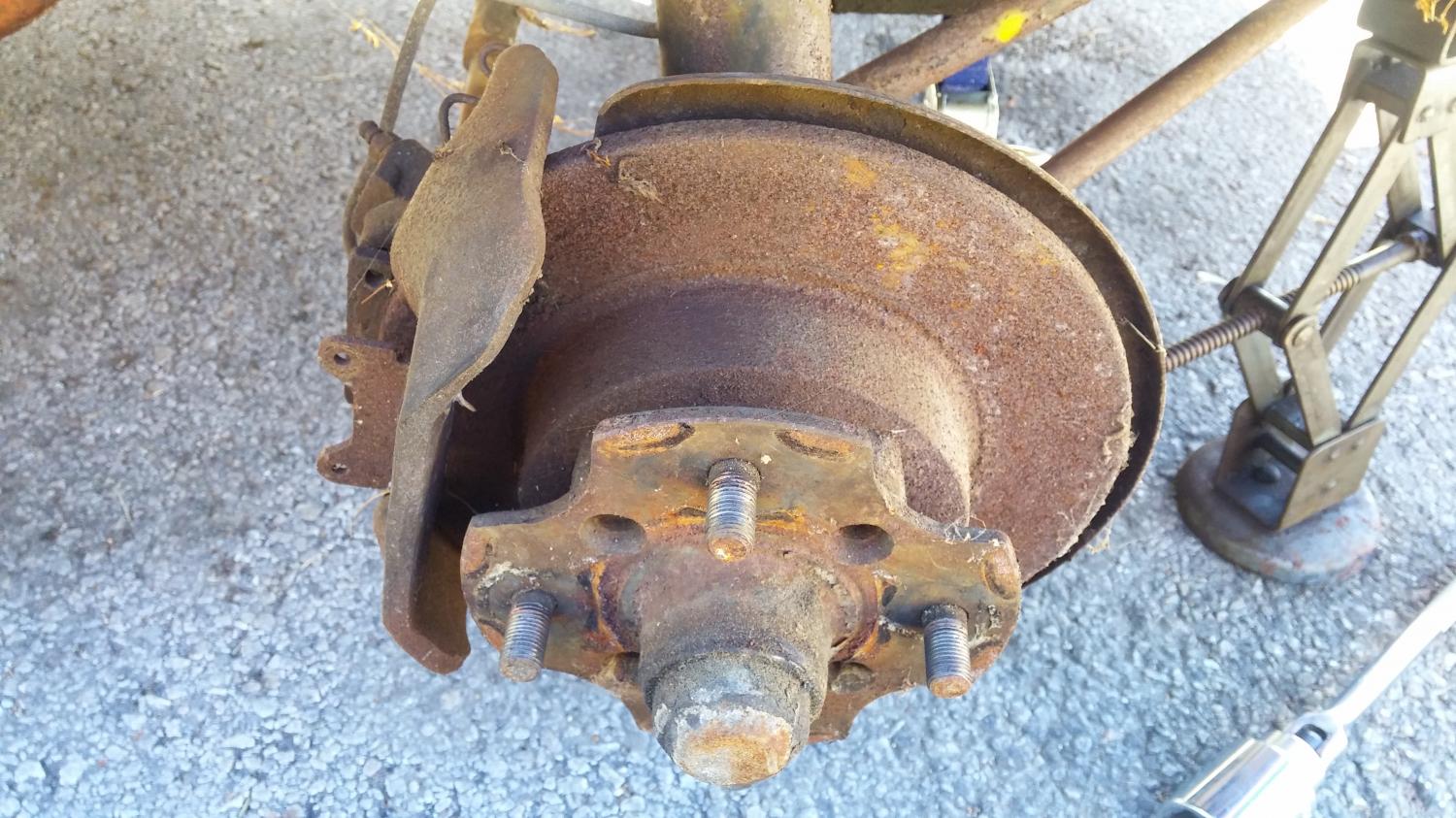 We brought Dullahan home with a car dolly. The trip was difficult and slow, and I drove all through the night to get us back home - and then worked an eight-hour shift immediately afterward! I hate going without sleep. 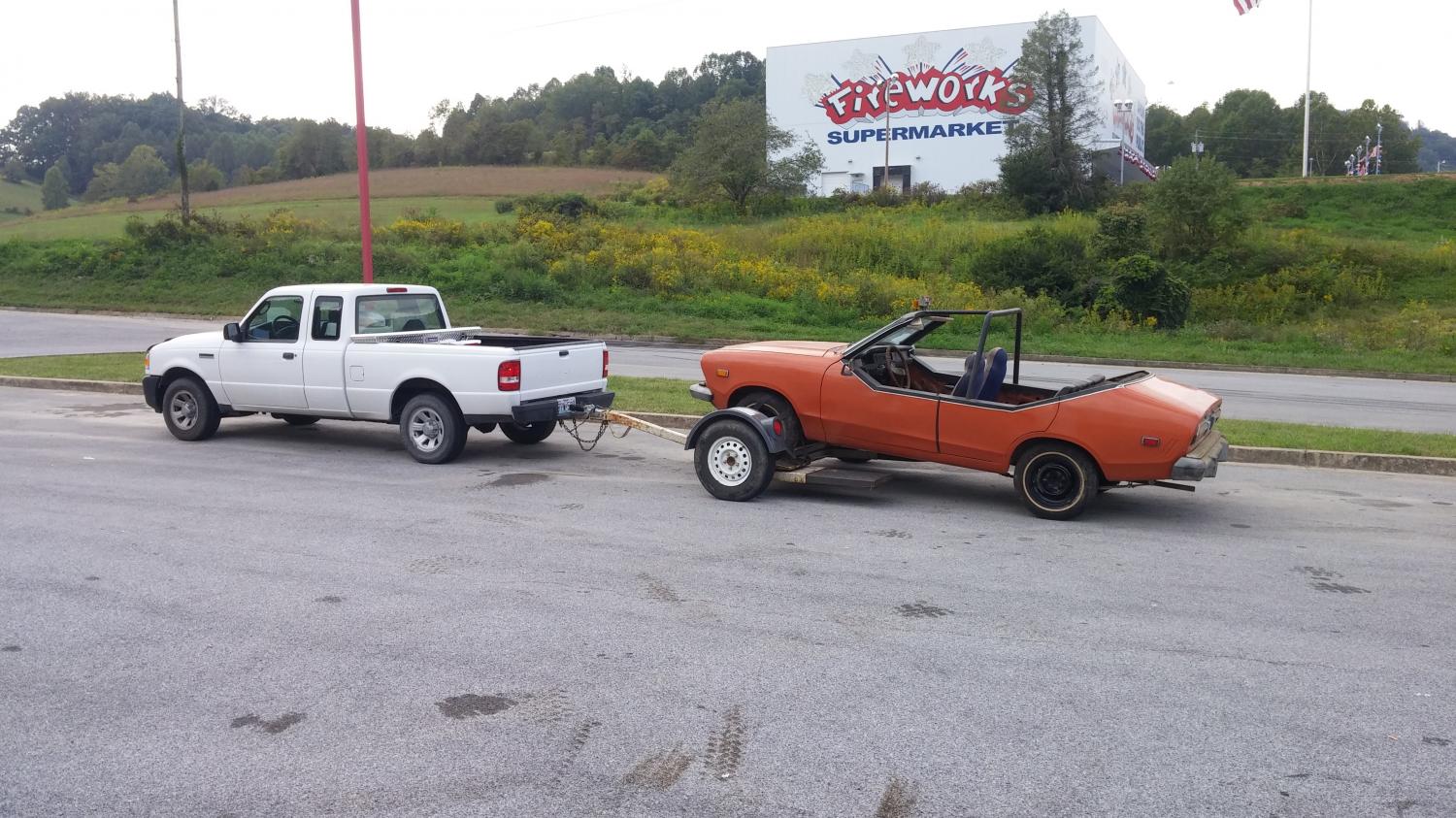 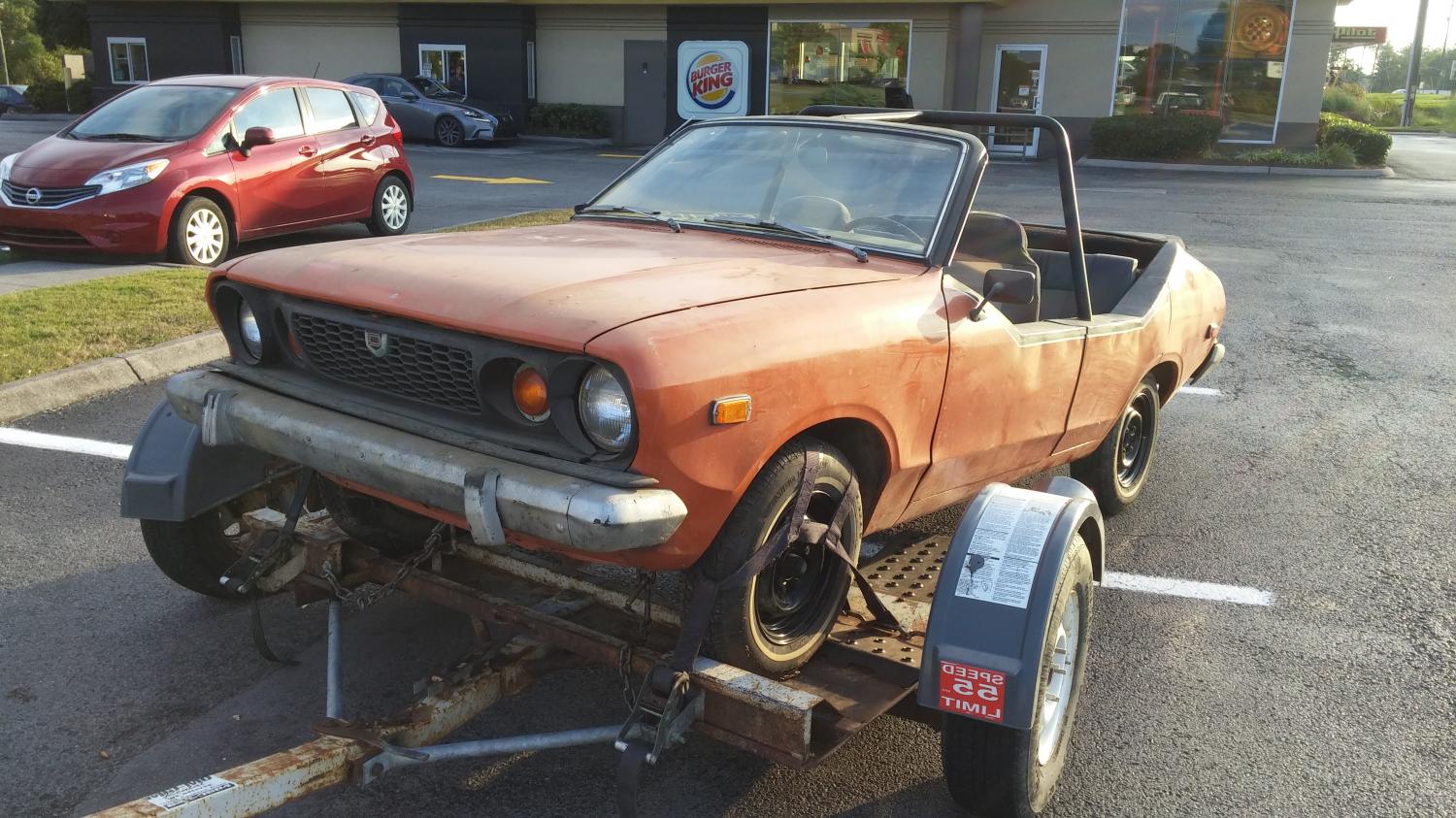 The Nissans/Datsuns of this vintage use engines derived from the BMC A-series, so much about Dullahan's drivetrain is familiar to me from Mog. 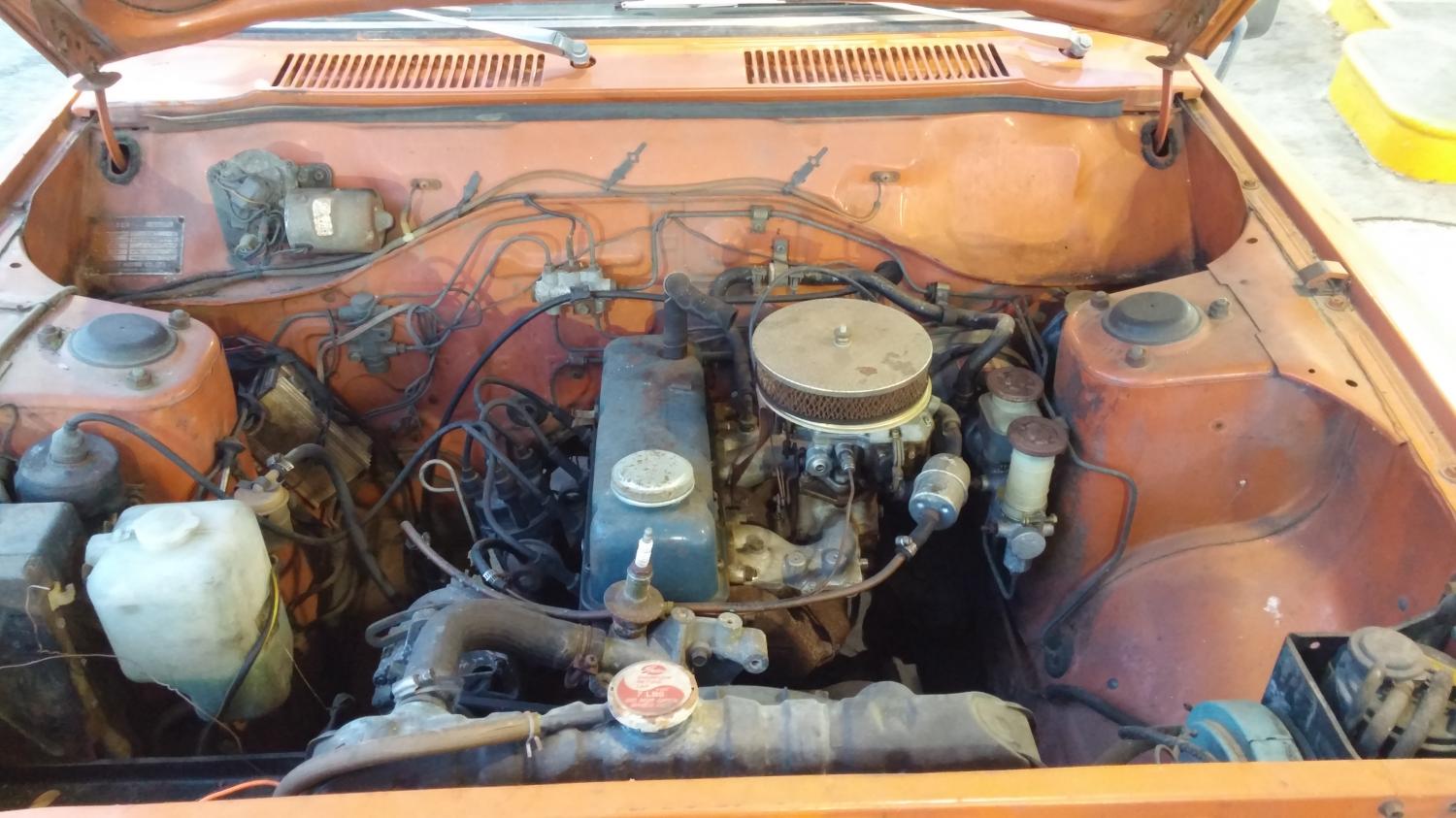 Dullahan had been extensively modified by the former owner - not just the roof chop, roll cage, and changed trimline on the doors, but many mechanical items are different. All the emissions equipment had been removed, and the original Hitachi carburetor was replaced with one from a 1964 Ford Mustang (with a manual choke, instead of the Hitachi's electric one). I rebuilt the Ford carb and got a new air filter. 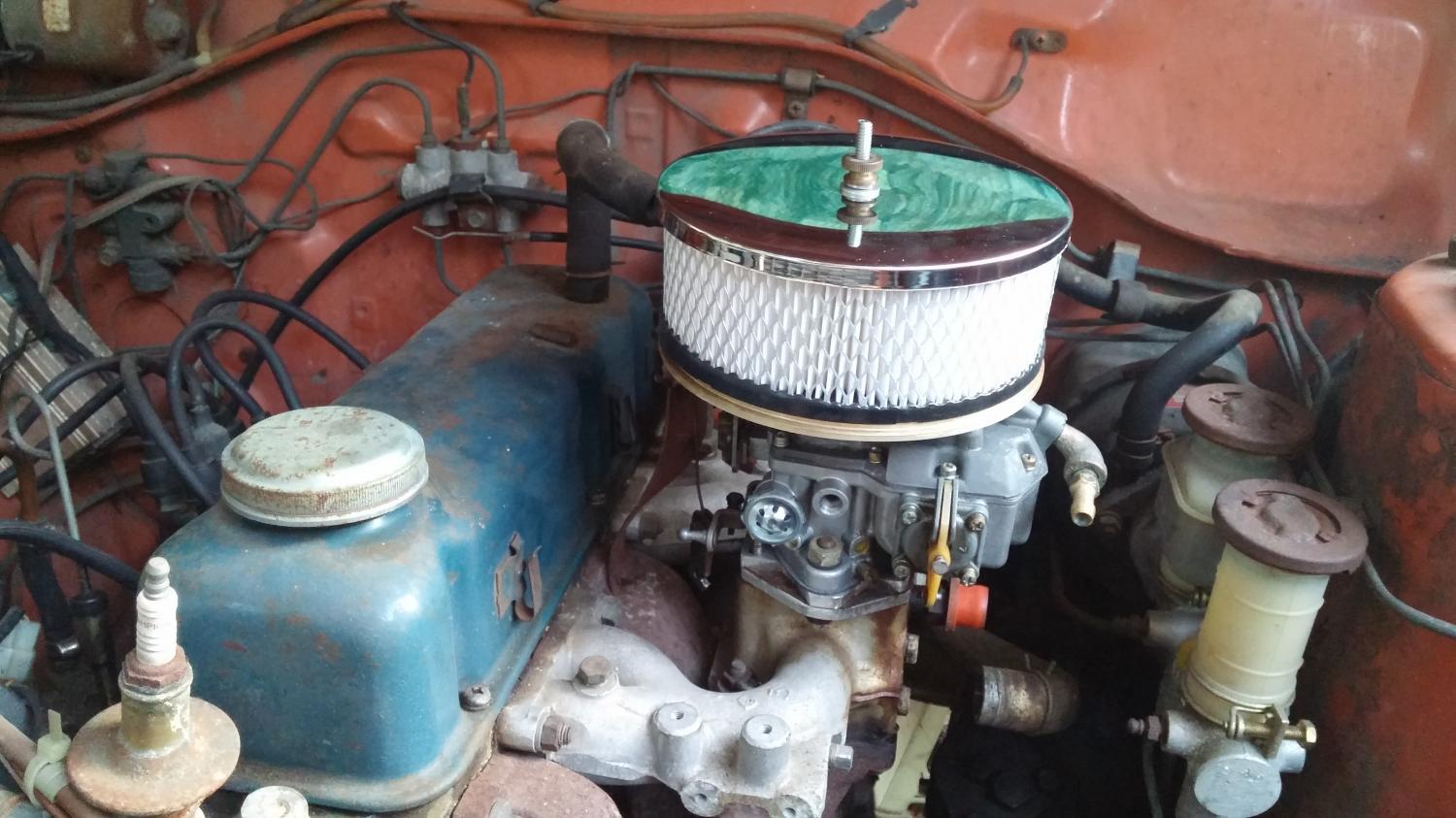 The brakes took a while to sort out, but I was able to find most of the parts through my job at the auto parts store. Thank heaven for that discount! What do you think of the purple calipers? 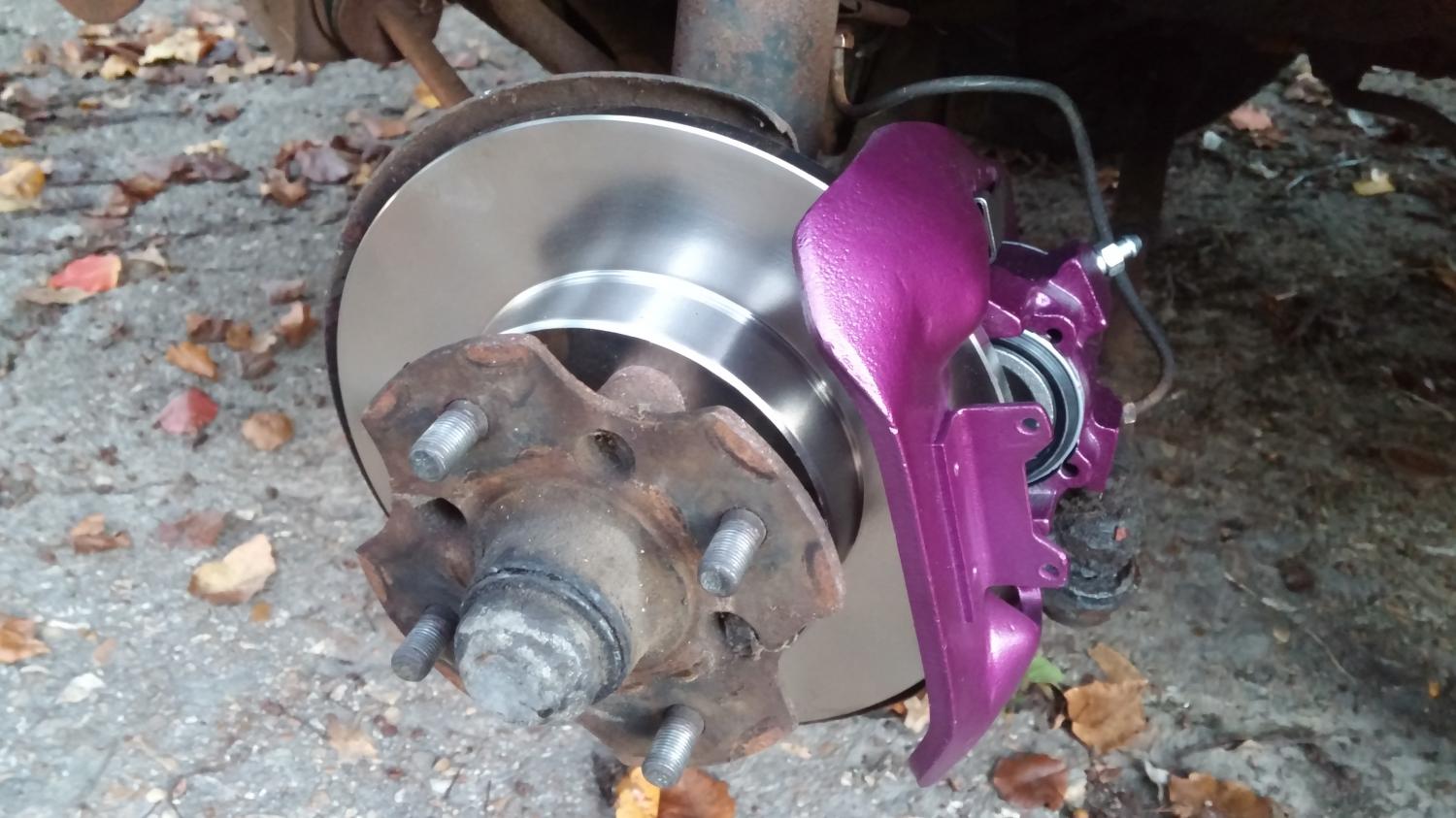 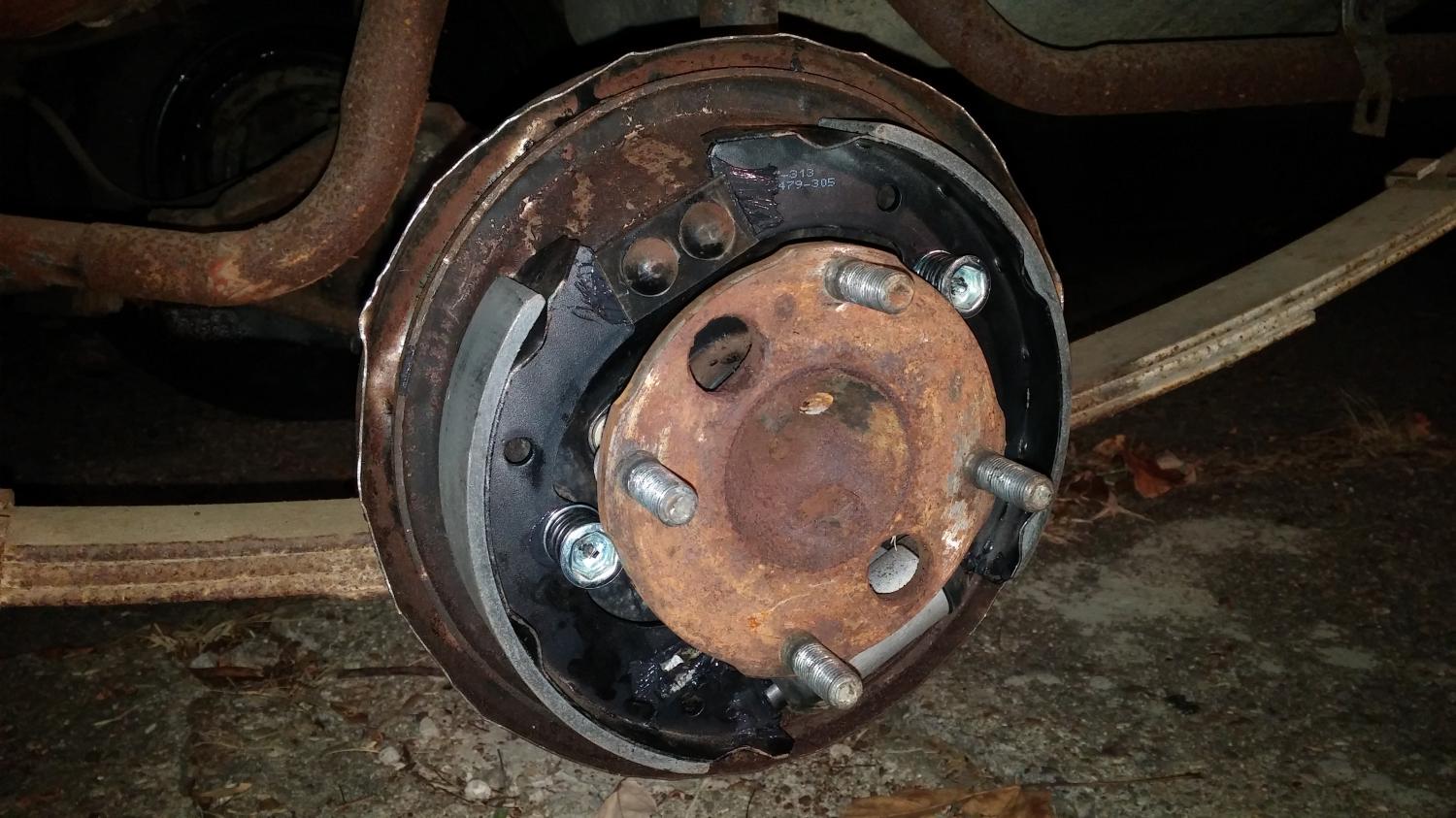 I turned the drums myself on the auto parts store's turning lathe! 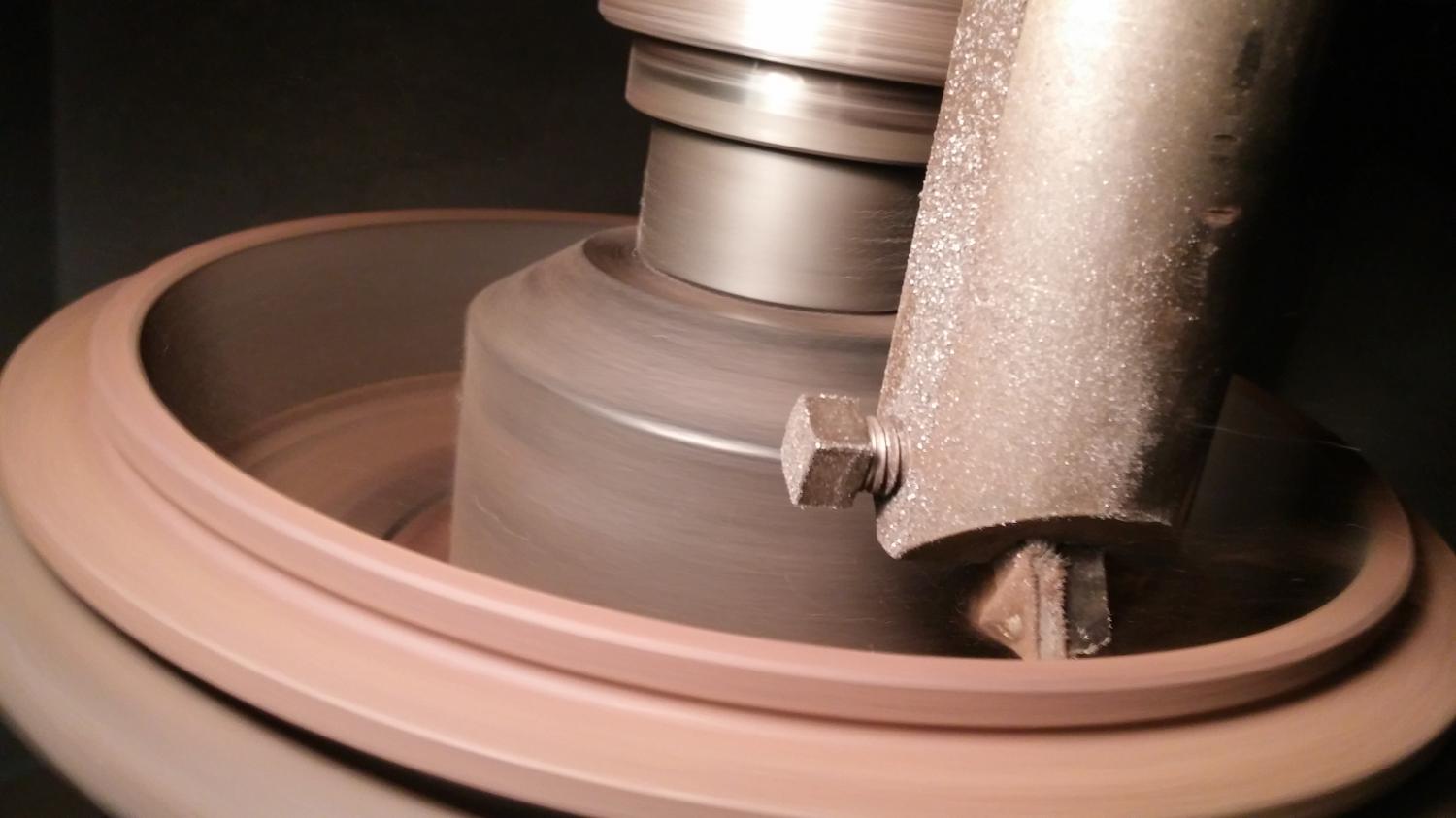 The big recent job was sorting out the fuel system; the former owner had left gasoline in the tank, and in the intervening decade-plus, it had evaporated into a thick layer of varnish. I soaked the tank and main fuel line in caustic chemicals for a while, reinstalled everything yesterday, and was able to pull fuel from the tank. In fact, I test-fied the engine! Have a look at the video here: " onclick="window.open(this.href);return false;

I repainted the valve cover, too. Not really important, but shiny. 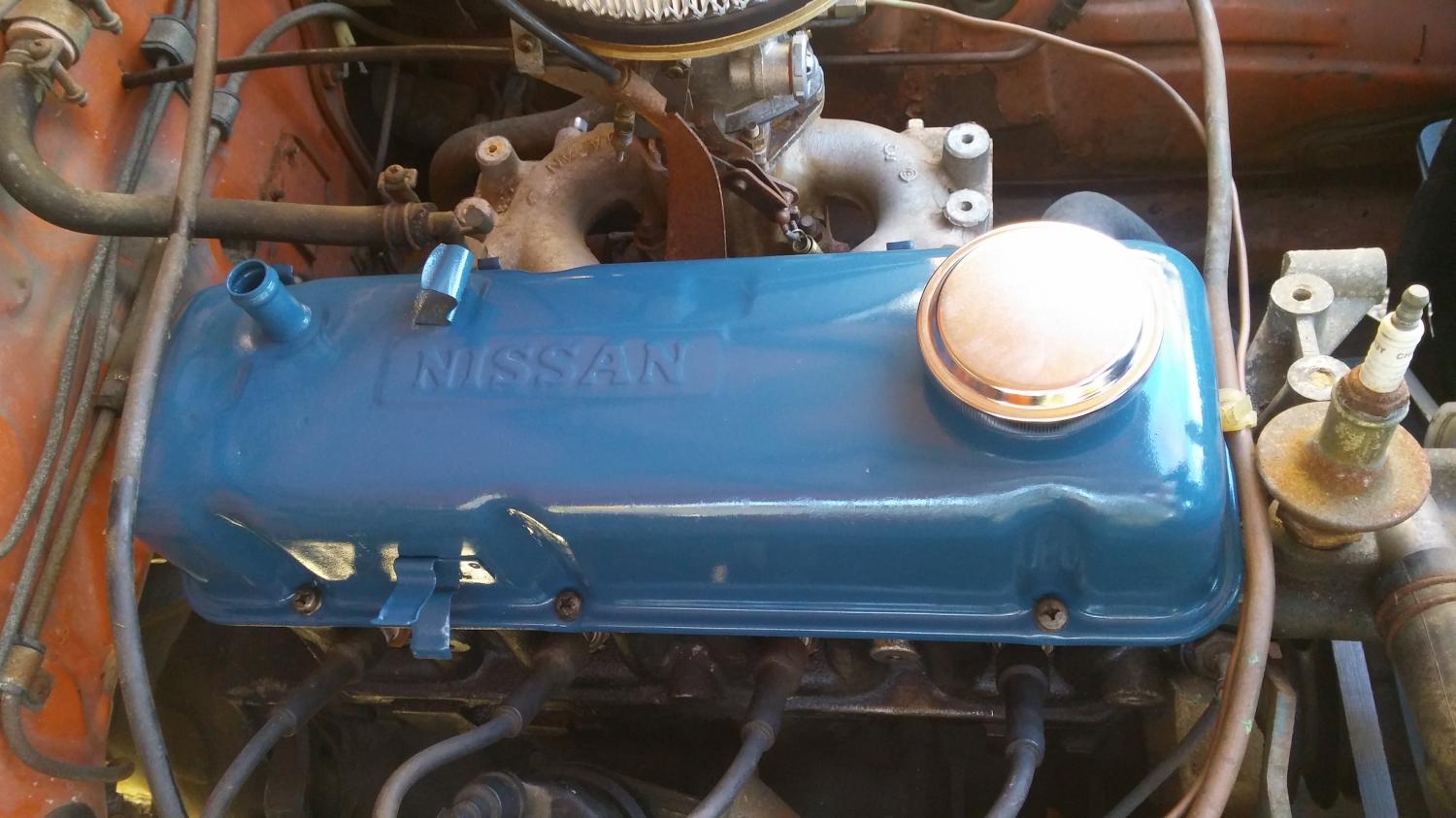 What's next? Dullahan needs both its clutch cylinders replaced, and of course the clutch and brakes need bled. A few other small items are necessary, but after that, it can go on the road. The long-term plan is to replace the front doors with unchopped ones, restore the trimline with box sections over the rear doors (making Dullahan a two-door), and have a soft top (you guys call it a hood?) made, to create a convertible. It'll certainly be unique!

Nice, always been a fan. One of our neighbours bought a 120Y brand new August 1st 1977 and I thought it was ace

Did look for one myself a while back but there were none about worth having.

Keep up the good work.

Here in Oz we take the Nissan motor and put them in our Morris minors....we are a very multi cultural mob.

UPDATE: in mid-December I misplaced the title for Dullahan before I could transfer it into my name, meaning Dully has just been sitting for most of the past four months. I did drive the car about three miles, to our new apartment, in late December. Here it is at the new place: 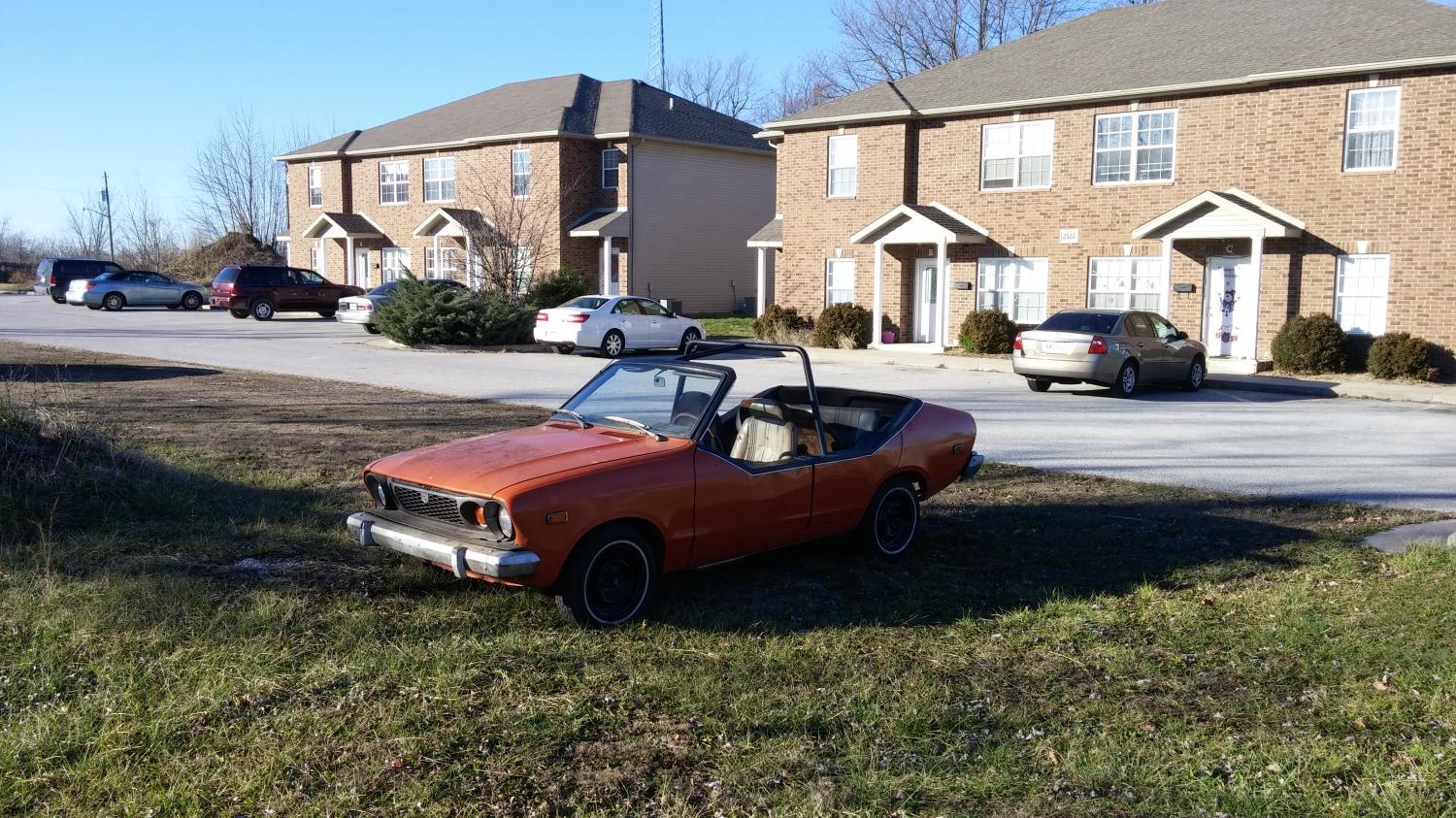 The car needs a few more things - the engine likes to die when shifting up, the wipers don't work - but none of that matters until I can sort out the title situation.