I've decided its time to show off my latest project which is putting a 1961 Traveler ont the running gear of a 2002 Mazda MX-5 Miata. This way I'll have a Morris with full independent suspension, disc brakes, 148hp and fabulous handling, plus reliability. Surprisingly, the Mazda is bigger than the Traveler, so its a bigger job than I first anticipated. I'm posting pix of progress to-date.
First step was to media blast the stripped Morris shell. THis showed up numerous bodges, loads of rust and some accident damage (never buy a car on Ebay after a few drinks!). The wood was also 100% rotten, so I've now invested a ton of money at both ESM and Woodies - both very good to deal with. I stripped down the Mazda to its subframes; this is the beauty of the MX-5 - its got front and rear subframes joind by an aluminum brace so is essentially a self-contained chassis.e However, the Mazda wheelbase is 3" longer than the Morris, so the brace needed chopping, plus a new shorter driveshaft was required. I then fabricated a 2" square sub-chassis to tie everything together. The big moment this week was to lower the Morris body over the running gear and see how it all fits. Everything lines up really well. Next steps will be to build new bulkheads and floor, and then I'll attack all the rust, including completely replacing the sills. I won't be keeping the stupid 17" chrome wheels - I've ordered a set of 15"Minilite-types.
The plan is for this car to end up in UK as our Summer Driver, so I'll be keeping it RHD.
Although I'm a member of the MMOC, I get the feeling that they'd disapprove of my work; MMOF guys seem a lot more interesting!
I'll send in progress reports as the project progresses, but if anyone wants more info, I'm happy to oblige. TM, that should work out well. Good little engines and gearbox in the MX5.

Look forward to the build pics

I hope it all goes well. The beardmore bros were doing an MX5 minor build but its not on their website anymore so not sure whats happened there

Keep up the good work and keep us updated 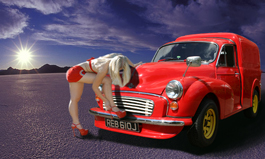 I guess that's one way to shifting the steering wheel to the wrong side!

Welcome to the forum Texas Mongrel, looks an intersting project. Thanks for sharing with some great photos.

Look forward to seeing the build.

How do you think the running gear from the Traveller will cope with MX-5 Miata body..?  :lol:  :roll:

Wish I had the skill

Looking good. Had wondered how long it would be before people started using the mx5 donor. My father is looking at using the mx5 engine and autobox into his triumph spitfire, so It will be interesting to see how a full (almost floor pan job) compares with regards to work involved. Do keep us posted.

I almost bought an MX5 (our name for them) for my wife a few years ago, but I felt it was a bit of a let down in both performance and general driveability - and it was nearly new. I'm sure in a Minor it will be whole different ball game - keep up the good work.

Should be a lot of fun when finished - an old Traveller with sports car handling.

Makes a refreshing change from the usual Fiat/Zetec twin cam too.

Love it, so how does the steering line up? I would imagine the driving position on the mazda is further back (and lower) than the traveller. Look forward to seeing this project develop, looks so simple, but no doubt has already caused some headaches! At least the engine position, brakes and suspension have already been designed to work together.

The more I look at this the more I wished I had your garage...

This is a similar concept to mine, I was originally going to stretch a traveller body onto my TVR chassis and call it the TraVelleR.
I too wish I had your garage, good luck with the build and keep the pics coming