How High to set the Engine?

How High to set the Engine?

When fitting in a different engine what determines how high you set the engine above the chassis rails?
I'm thinking about the steering rack and then sump clearance, and imagine the lower it's set the better the handling - or does a couple of inches here or there make much difference?
I'm asking really because the ST170 Engine I shall be using has a lovely exhaust manifold that could be modified to fit but is quite deep and also the more clearance above the suspension lever units the better for the inlet manifolds 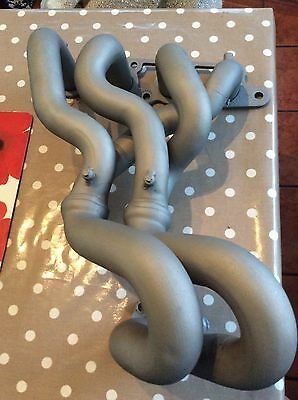 You have to consider the universal joints on the propshaft too.

So because the Minor steering rack is in the way, the higher you lift the front of the engine the greater the angle to keep the bellhousing away from the rack.

This in turn alters the angle in the UJ nearest the gearbox. It will alter both but the front one will be the most affected as you still have to keep the prop in the tunnel so the rear one is not likely to alter much.

Have you seen the ST170 thread on here, you should be able to work out how high yours is in relation to his.

Picture on this page showing how low his is.

Mmmm - Not sure i can see from that pic but yes I've read Morrisfixer's thread so many times thanks Sean.
Regarding the prop am I right in thinking the diff's propshaft face should be parallel to the gearbox's face at mid suspension travel?

I have read somewhere that the axis of the diff input should point about .5 - 1.5 degrees downward. The universals must not be in a straight line gearbox output to diff input.

Edited to change the figures for angle. I'm really not sure what the angle should be - my memory of the article is pretty fuzzy.

Yes I remember now watching a video setting the diff angle in an Escort I think and they were setting it at 5 degrees if I recall correctly.
So if the diff has to be at a different angle to the gearbox tail then it doesn't matter how low or high the gearbox has to be in relation the the diff within reason?
So I'm thinking that maybe sit the engine as high as the clutch, steering rack and floor pan will allow. Ideally the engine should be set as low as possible but as this isn't going to be a track car?

For a street car, I recommend that you pay careful attention to the sump clearance.


Ideally the engine should be set as low as possible

In Oz, there are lots of Minors with Datsun and Corolla motors. Many have big dents in their sumps from hitting objects around our roads.

I'm not sure about the Corolla engines, but certainly the Datsuns, it is pretty common for the sump to be substantially shortened to give reasonable clearance. I have a couple of shortened Datsun sumps in my workshop.

Back to the diff pinion angle:
Here is an explanation I found on another Morry site, complete with interesting spelling.

The pinion angle is important, I wont go into detail as it's a pretty complex, but both uni joints must not run strait towards each other, or the uni's wont last, they must have a few degres of (bend ) in them so they work, there are specs for this but I just point the front of the diff centre slightly down, so it touques up straight under exeleration. To far down & you will get vibration.

Not sure about the pointing it down.

If it points down and back up into the gearbox its a bit like a skipping rope. But I suppose in an extremely low car the centre of the diff may be higher than the gearbox main shaft.

I read more a long time ago in reference to Land Rovers and axle articulation in short wheelbase vehicles which is a more extreme situation and the centre of the axle is generally lower than centre differential outputs.

I agree they need to be not in a straight line as the universal joint must move a little.

This includes a short video which demonstrates why they should be set parallel and in phase.

Phasing is extremely important, but whoever builds and balances your prop should be aware of that. Also when you measure for it allow for some movement in and out on the splines as the axle moves up and down.

I would ignore the earlier note to set it so it goes straight under acceleration. It is not clear in what context that was written and as you are not building a dragster which is under full acceleration for most of its moving time. I would work towards the most common scenario, i.e. people and a bit of tools or luggage if you intend to travel a lot.

In practice I think if the suspension is already set at the rear then get the gearbox main shaft on the same angle and see how high you can get the engine leaving about an inch or two clearance on the steering rack, but maintaining the angle. Which is why I first commented that you cant tip it on too much of an angle.

If your suspension isn't set yet then perhaps you have a little more choice regarding positioning of mounting brackets to set the diff angle to match the engine installation.

You generally need a bit of clearance on the rack just for wiggle room to get engine mounts in etc. While running as long as it doesn't hit is fine, but you need to be able to get it in and out which generally means lifting the weight off the mountings. And its good to be able to get the rack out without taking the engine out too.

Unfortunately you may still need to modify a sump, but you are probably doing that anyway making a Zetec RWD.

Yes Thank you Sean. This is getting complicated - 3 degrees is not a lot so even the stance of the car has to be determined before the engine goes in!

It will move in use, so I believe it is more key to get the parallel and phasing right.

This is where 4 link suspension with equal length links scores as the diff angle stays the same, but a lot of RWD road cars didn't manage that and the axle swung in an arc and the diff angle changed while driving.

When its parallel as in the Video no matter how far the suspension moves the angle at one UJ is equal and opposite to the one at the other end and it all works in perfect harmony.

If as part of whatever you are doing you are going 4 equal length links then it becomes a bit easier as you can weld the brackets on the axle the desired number of degrees off from the flange of the diff while the axle is on the bench. I put the axle on small axle stands and a scissor jack under the nose of the diff when building a Locost. Admittedly when it was all done there was almost as much suspension in the tyres as the springs and the diff didn't move much anyway.