I'm very new to engines so please bear with me!

No joy, the starter turns the engine over but all I've got so far is a few 'clicks' and a small amount of smoke coming out of the carburettor air filter. So at this point I've stopped!

I had adjusted the valve clearances and installed new spark plugs and it was running perfectly with these prior to me knocking the Accuspark coil low tension leads off.

If there's smoke then it must be firing. Try turning the dizzy anti clockwise a little then try a start, if nothing happens then turn a little bit more. Keep trying until you hit that 'sweet spot' when it will start.

Thanks for that. I turned the dizzy anticlockwise as far as this but no start, then the battery ran out so I'll try again tomorrow once it's charged

It sort of 'phuts' with a bit of smoke from the carb at this point. Should I go further anticlockwise ? The Vaccum bit of the dizzy nearly hits a lead coming out of the bottom of the engine at this point. 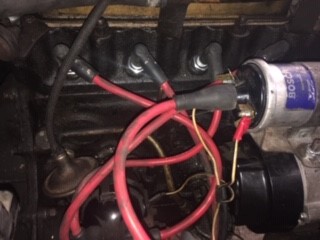 Take it the other way next time and see what happens.

Turned it clockwise until it backfired but still no start. Tried setting the timing with the ignition on and the dizzy cap off and a spark visible at the points. Changed the plugs incase the ones in there had too much fuel on them for repeated failed starts. Any other ideas ?

Got it going on the old distributor! I was 180 out with my timing. Used my thumb over the no1 spark plug hole, which put the rotor arm 180 from where I had thought tdc was, moved the distributor leads around and it started first time!

Still a bit confused as no1 cylinder rockers were moving when no1 piston was at tdc, with no4 rockers not moving. I had been trying to set it up on the opposite of this.

We’ve all been there.