In Australia a common engine swap is the 1200cc Datson, my question is:

A Minor with the 1200cc Datson engine fitted in the UK, are service parts etc available in the UK? If so, where from?

think the engine was still used in the micra, the one that looks like the mister man car mk 2 maybe, theres still a lot around, the engine carried on for a while but went spi then mpi

When its done its done (for now)
Derv Turbo Power (Joosed)

Is that the Datsun that is very similar to the A series, perhaps even a copy? Might be useful to someone if Micra's were a source.

I don't have a clear photo of it so I'm not really sure yet. I'll be looking at it in a couple of weeks so will get some pics. All I know is it is a 1200 Datson engine imported from Oz 3 years ago.

Here are the pics I have at the minute. 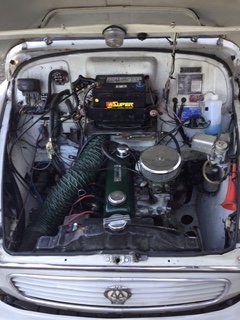 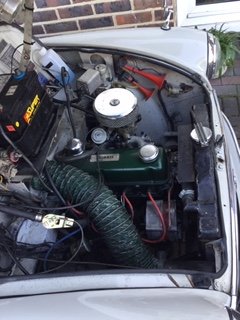 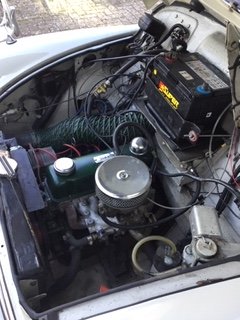 Is that the Datsun that is very similar to the A series, perhaps even a copy?

It certainly isn't a copy. I have a 1200 as well as a 1400 and 1500 version of the same engine. It is quite a different design and I would regard it as superior to the BMC A-series in just about every way. They are known here (Australia) as being 'bullet-proof' even when used in extreme racing conditions.
In Japan, Datsun was licensed to manufacture Austin A40 engines after WWII. That engine was the 'uncle' of the Austin/Morris/BMC/Leyland A-series. Datsun went on to make other four-cylinder engines and many thought they must be based on the A40 engine or even the Morris A-series. Well, the Datsun 1200 does have four cylinders--just like the Morris A-series, so there is a resemblance.

Here in Oz, there is a large proportion of Minors fitted with Datsun A-series engines.

For the OP's info, I can point him in the direction of web sites that show how to fit the A12 into a Minor (and even a Spriget). They are a relatively simple job to fit to a Minor and involves very little tampering with the bodywork.

The main question that I needed an answer to was more about getting service parts etc here in the UK. I am looking at buying a minor with the A12 engine and box already fitted and was thinking ahead about servicing etc or whether I would be looking at swapping it out for something else in the absence of available parts.

I can't say for the UK. I gather that the tinworm plague you have over there means that the RWD Datsuns disappeared from your roads a very long time ago along with support for them.

They are very tough, reliable engines (and the gearboxes and diffs too) so you would be unlucky to need much in the way of parts apart from service items (air filter, oil filter) but alternatives should be available for these in the UK.

I can say that there are lots of bits still available in the USA and Oz. Other locations with good supplies I think would be Japan (of course), Malaysia, South Africa and New Zealand.

There is at least one major site devoted to the RWD Datsuns, with a huge wealth of info and advice available there.

Seems to be a ton of service parts for Datsun / Nissan engines on ebay. I can see why they are a popular choice in Australia, South africa etc.
Im looking for an engine for my Pickup, anyone got an A12, A13 or A14 engine kicking around?